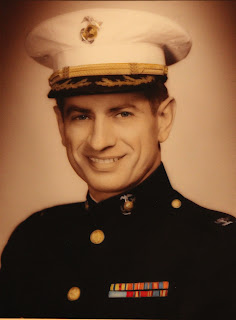 (This past Thursday we buried my grandfather, my last remaining grandparent, in Dallas, Texas. As far as Christian funerals go, it was a good one. We wept for things that deserved a good cry and we laughed in remembrance of things that warranted a happy response. This is the eulogy I gave during the funeral service. It was wonderful to share this experience with my family. It was also very stirring to witness the Marine Corps guard fire its three volleys in his honor at the interment. I have a feeling it will take me several months to properly process his loss, but I'm grateful for a family that will share this process with me and give me permission to do it well.) 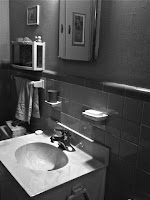 When I was four or five years old, I remember sitting on the toilet lid in my granddad's bathroom watching him shave. For the occasion he almost always wore a white t-shirt.  I remember how his skin glistened with an olive oil tint and how his Roman nose took command of his face in the way that any good Italian took command of anything--with a self-assured confidence, like a Joe DiMaggio at the baseball plate or a Frank Sinatra on the silver screen. The bathroom, to my mind, was impossibly narrow, overrun by my grandmother's pink and cream cosmetic accessories, and my grandfather assumed an impossibly large place in it.

Lathering his face with a thick froth of shaving cream, he would cut across his cheeks and chin with a thick metal razor. He cut carefully but not fussily. The cuts were always clean and efficient, and I'm guessing that the engineer in him wouldn't want it any other way.

My grandfather did not allow me to interrupt him. I could watch but I was not to interfere with a man's duty. This was man's work.

Part of me was afraid of my granddad. He had been a colonel in the Marines.  His arms were muscly, and at 6'3" he seemed to always tower forbiddingly over me. He drank beer. He trimmed his lawn just so. He managed his finances punctiliously. He bluntly announced his opinions. And even as a kid I always felt that he kept at bay, perhaps just beneath the surface, a reserve of powerful emotions, some of them terrifying. He was my granddad, yes. He was my mom's dad. How much more intimate and normal could that be? Yet as I watched him shave, with nothing less than the kind of unqualified awe that a little boy could have for his granddad, he was more mythic figure than homey grandfather.

Yet there was also this. Behind the statuesque figure that was my Italian grandfather was a very tender man who loved his grandchildren with a commitment to invest in their lifelong wellbeing.

Granddad paid for Christine, Stephanie and me to get swim lessons in Guatemala.

Granddad gave money for us to take music classes in Bannockburn, Illinois.

He bought Christine a computer when she returned from England after her first year of college.

He made it possible for Stephanie to take ballet lessons in middle school.

He taught me to love the Dallas Cowboys, beginning in 1979.

During my senior year of college I passed the Foreign Service exam and had driven up to Dallas on my own in order to participate in a full day of interviews with officers who worked with the State Department. I knew my granddad was proud of me; I wanted him to be proud of me. I woke up early on a Wednesday morning in my grandparent’s house. As I got dressed I could smell the smoky fragrance of sausage patties floating in from the kitchen. They were my favorite breakfast food. They still are.

When I walked into the kitchen I saw something I'd never seen before and never saw again. My granddad was preparing a lunch for me. With meticulous care, he placed a sandwich, an apple, some chips and a candy bar in a paper sack. He wanted to make sure I ate well that day. He wanted me to do well. The gesture represented a small but significant form of love for my granddad.

This past September, right around the time our daughter was born, granddad sent a generous sum of money to Phaedra and me. With the frequent challenges that we have faced since Blythe was born, I don't know what we would have done without his gift. Not a week has gone by this fall when we haven't thanked God for granddad.

In years to come we will be telling Blythe all about her great-granddad, who, when he met her over Skype in late October, his one and only time to see her, he immediately launched into the Bing Crosby song, You must have been a beautiful baby, you must have been a wonderful child. He sang those two lines over and over, and with the dementia that had recently taken over his memory, he looped back to the song throughout the entire course of our conversation. Phaedra and I received it as his final blessing to Blythe.

While it was clear to me as a little boy that I was not to interrupt granddad's morning shave, this didn't mean I was left un-involved. Even then granddad invested in my education. While I watched, granddad would narrate what he was doing--shaving cream here, the razor just so, a clean face washed down with cold water, not hot, and a splash of musky after-shave to make grandmother happy.

Granddaddy, thank you. Thank you for investing in all of us grandkids and great-grandkids. Thank you for being so very Christ-like in this manner. As someone who carries your name, this is a part of your character that I wish to emulate, with my own kids and grandkids. It is a part that makes me very proud of you, granddaddy, and that I think would make you proud too. 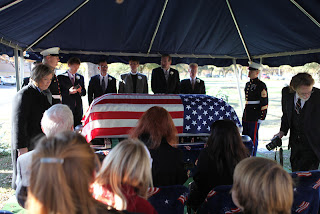 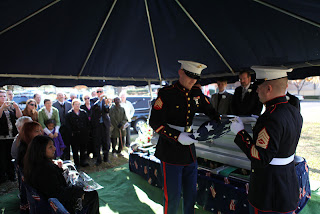 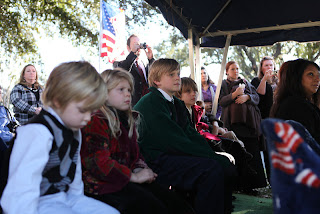 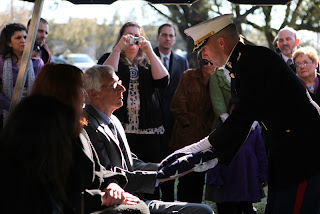 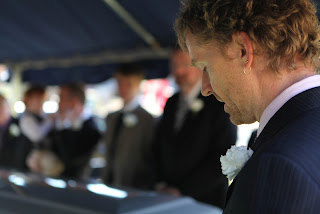 PS: There is a strong stirring in me today to see my granddad on the other side of the veil. Come, Lord Jesus, come.

tamarahillmurphy.com said…
W. David Orlando Taylor, I'm so glad for your words that help me get to know your granddad a little bit. It helps me think again about my own. It helps me appreciate the intention of your parents in naming you. And helps me love your whole family even more. Blessings on your head as you grieve, friend.
9:22 AM

w. david o. taylor said…
Tamara, thank you. Grief is a odd, often unnerving emotion, and knowing how to enter into it well is not something I practice often, so it's good to have all the help one can manage.

I just wish I lived in a society that practiced grief as a normal, empirically ubiquitous, desirable and ritualized reality. We'd then have well-used muscles. We wouldn't have to start from zero in the "grieving well" department and hope to God we did it thoroughly. And we could practice it in appropriately public and private fashion.

Alas, I don't think that's going to happen any time soon in North America (unless it's in ethnic, sub-cultural pockets).
11:47 AM

Greg Scheer said…
This is really moving, David. Thank you.
7:20 AM