John Witvliet prophesied that, once baby came, I'd be blogging less. John is a true prophet. He's right.  I'm going to be blogging less for the foreseeable future, and John deserves a fine robe and a staff that makes miraculous things happen. Oh, wait, he already does that: he's the director of CICW.

This past week I've spent an inordinate amount of time away from my wife and infant child. Good grief. Who knew a man's heart could constantly and perhaps uncontrollably expand, and nearly break, for love of his daughter. I'm ready to be home. At the moment I'm taking advantage of Toronto International Airport's way cool free wi-fi to jot down a few notes about my visit to NYC. Next I'll share notes from the lectures I gave at Tyndale College in Toronto.

And, yes, if you're a church leader of any sort whatsoever: CIVA is for you.

You can get a precis of CIVA's history here, but suffice to say, CIVA is an organization that's serious about art and serious about faith. Having spent the past weekend in meetings with the board, roaming around New York City from MOBIA to All Angels Church, from Jersey City to Queens, I have a great sense of hope about the organization's future.

To the two groups that have every good reason to be nervous about CIVA--professional artists and church leaders--and, yes, you should be nervous--I am here to tell you, Hermes-like: "Stay alert. Don't give up on CIVA. Watch what is about to come down the pipeline. CIVA's best days are ahead. Better yet: join us and help us take the organization into a vibrant, muscly, fruitful place." (What CIVA has accomplished thus far, over the past three decades or so, is outstanding. Full stop. But according to the testimony of folks who've been with the organization from the beginning, CIVA is entering into a new, and very exciting, season as a non-profit organization.)

The 2013 biennial conference will take place in Chicago, home to some of the most arresting architecture in America, a vibrant group of churches, outstanding museums and Batman. It'll be killer.

At some point in the near future, God-willing, a conference devoted exclusively to the question of the church's relation to the visual arts will take place. By "church" I mean the church in its worship, community, discipleship, service and mission to the world in the broadest and most concrete sense of these terms. By "visual arts" I mean anything you could ever imagine falling under that medium. Stay tuned.

If you want to join a growing community of visual artists, check this out.

If you're a church who has wanted to exhibit really beautiful visual artwork, check this out.

If you're wondering whether CIVA's board is comprised of sharp, humble, servant-hearted, energetic, far-sighted, well-connected men and women, the answer is: yes. Most definitely yes. See their bios here. The organization is in the hands of good leaders, if I may be so bold.

Am I indulging in a bit of hyperbole in this blog entry?

Not really. Not if I'm honest.

My only regret about my trip to NYC is that I didn't take enough photos. This subway-riding mug of me and Brian Moss is as good as it gets. 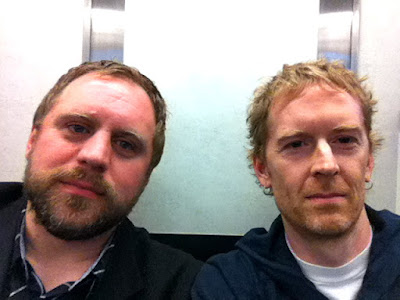 Something Steve Jobs' sister said is sticking with me all day
"I grew up as an only child, with a single mother. Because we were poor and because I knew my father had emigrated from Syria, I imagined he looked like Omar Sharif. I hoped he would be rich and kind and would come into our lives (and our not yet furnished apartment) and help us. Later, after I’d met my father, I tried to believe he’d changed his number and left no forwarding address because he was an idealistic revolutionary, plotting a new world for the Arab people.

Even as a feminist, my whole life I’d been waiting for a man to love, who could love me. For decades, I’d thought that man would be my father. When I was 25, I met that man and he was my brother."

tamarahillmurphy.com said…
OK, so I LOVE this post. Love it. Love the picture of you and BMoss, love all the enthusiastic CIVA proclamations, love that you were in NY, love that you missed your daughter and wife. love all of it. also, the quote from Steve Jobs' sister has special significance in the context of where I'm spending my week, leaning into and praying for relational wholeness for myself and others. thanks for sharing it.
11:57 AM

w. david o. taylor said…
Tamara, thank you. I enjoyed writing it and I'm pretty sure I meant every bit of it. The other pic is of me and Brian Williams, who has attended the LL retreat I lead.

Praying for you and your Brian this week.
12:53 PM

Essentially Heather said…
Goodness it's been too long since I've made it over to your blog to read but as always I enjoy your posts so much. And congratulations on the birth of your child! Here's the dilemma...less time to blog and somehow more blogging material. :-) Blessings to you and your wife and sweet daughter. Thank you for giving your all in every season of life you find yourself to be a restorer of beauty and a culture creator. ~Heather
4:37 AM

Chris Deeves said…
It was great to meet and chat with you at John Franklin's up here in Toronto. Just finished the book - and it was not only inspiring but convicting as a Creative Arts Director who has newly launched an Artist In Residence program here at our church.
Keep on - I've checked out CIVA, you are right, there is something mighty happening over there... :-)
Blessings, Chris Deeves
8:26 AM

w. david o. taylor said…
Thanks, Heather! And, Chris, so nice to meet you as well. All God's blessings on your work with artists.
12:19 PM