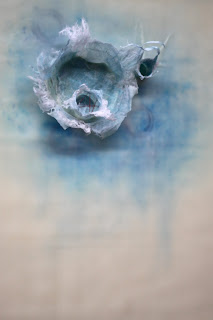 The past few months Jeremy, Bo, Brian, Tanner, Jacki and I have been working our way through a series of texts. The texts, which come primarily out of the Catholic tradition though also include representatives in Radical Orthodoxy, have focused our attention to questions surrounding art, aesthetics, beauty and such. Our discussions have been consistently stimulating, and at times rollicking. Laughter is good medicine for conversation around difficult ideas. Coffee is never far from hand. Pumpkin bread, apples, power bars, fresh orange juice, good tea and chocolate have kept us company throughout. I cannot remember when I've had more satisfying discussions than these, and, yes, I feel very lucky.

The whiteboard in our study room has been marked by diagrams, sketches, categorizations, arrows, circles and any other geometric shape that might help us to keep the lines of thought clearly apprehended. While exhausting on some days it has never been boring (could it ever be?), and we are all aware, increasingly so, of the very demanding territory that this discussion entails. As I mentioned a while back, our readings have come from the works of von Balthasar, Aquinas, Maritain, Viladesau, Theological Aesthetics after Von Balthasar, Pope John Paul II, Pope Benedict XVI, John Milbank, Graham Ward, Keith Johnson, Edith Wyschogrod, The Cambridge Companion to Hans Urs von Balthasar, bits from The Beauty of God, and I've rummaged around Etienne Gilson and Flannery O'Connor as well as David Bentley Hart, Wolterstorff, Sherry, Seerveld, Chaplin and Frank Burch Brown.

The texts have not only provoked our minds, chiefly for good, they have also at times confounded our minds with the most elaborate non-sequiturs and distressing lines of logic. My provisional conclusion is this: the centuries-long discussion about art and beauty, specifically about art's relationship to beauty, is a dizzying one. 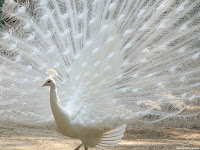 So to keep a few things clear, I have begun to write out a series of theses. The danger of a thesis, of course, is that its distilling character masks "a tissue of circumstances" (to quote Maritain) and a tangle of arguments behind them. They're intended to be simple, but in actual fact they're anything but.

Still, I thought I'd share a few things that I've learned along the way. What I've learned principally is to slow down--to read things three and four times if necessary, to look and to look again, to understand the author carefully before I make judgments (a basic requirement of charity), and to not be afraid, as hard as it is, to keep asking simple questions, however "obvious" or "silly" they may seem, and when I feel overwhelmed, to not panic but to recognize that these authors deserve the respect of careful, slow, patient study.

A fun assignment
My assignment to you, dear reader, then, is a fun one: Next time you hear someone speak, teach or preach about beauty, ask yourself: 1) Have they defined what they mean by beauty? 2) Have they told you the specific context(s) in which their treatment of beauty is meant to make sense?  3) Have they explained to you the goods that they believe beauty will yield as well as the ills that beauty might protect us against.

If they haven't done this, then chances are that they are not yet clear about beauty themselves, and therefore have unfortunately not helped you do your work better. That's a sharp statement, I admit. But it is also one that qualifies all previous statements I've ever made about beauty, which unfortunately have been burdened with a considerable measure of unclarity. (This includes the nervous relationship I hold to the title of my book.)

Here then are 9.5 theses in no particular order and by no means comprehensive. And a good cheer for not giving up on beauty altogether, because the world would be much poorer without it, theologically as well as actually.

1. Every discussion about beauty is necessarily a contextual discussion. There is no purely objective or abstract or general way to talk about it. The kinds of contexts, or traditions, that come into considerable play include:

2. Because a human person is a complex being, he or she can be simultaneously beautiful in one faculty (say, the intellectual) but ugly in another (say, in his or her relational or speech habits). That’s how physically unremarkable saints can be described as uncommonly beautiful or how Hollywood actors can be gorgeous but morally debauched. Here I am using beauty in one of its “classical” senses, as harmoniously unified, richly complex and attractively splendid. This also, by the way, brings to light the kind of complicated issues that come up in an aesthetically excellent but morally repugnant work of art.

3. While beauty began as a conceptual sub-category (e.g. to mathematics: Pythagoreans; political theory: Plato; practical reason: Aristotle; rhetoric: Horace), it eventually became a supra-category (with comprehensive, all-encompassing powers of explanation), and then receded to become a sub-category or even sub-par-category (for 20th/21st century contemporary artists and critics).

4. If you ever stand up in public to speak about beauty, you should do three things:

a. Define what you mean by beauty.
b. Define the context you have in mind.
c. Define why exactly you think it's important.

5. Because beauty in the contemporary world is often regarded as equivalent with standards of taste or mere appearance, it is rightly rejected as shallow, as “mere form,” and rightly found to be “a bit of a bore” (Somerset Maugham, Cakes and Ale).

7. Your average American believes that beauty putatively designates “feminine” qualities, which is why in common practice we feel more comfortable calling a woman beautiful than a man.

8. When beauty is separated from goodness and truth, it suffers. While it matters how we construe these “transcendentals,” the axiom stands regardless of our construals. The point is a dynamical one, that is, how they are interrelated, not a static one.

9.5 Discussions of beauty have been accompanied by a litany of bifurcations. Some of the more common ones include:

a. Art vs. craft
b. "Fine" art vs. the “people’s” art
c. Formal vs. expressive
d. Taste vs. vulgarity
e. Disinterested vs. interested
f. “art of glory” vs. “art of the cross”
g. Aestheticism vs. moralism
h. Invisible vs. visible or Infinite vs. finite

(Here below is something I found quite beautiful from Mothlight Creative. It's a video homage to Pittsburgh comprised solely of still photos. Artwork above represents some of Phaedra's new work. Three hours from now I'm headed here.)


April (For Pittsburgh) from Mothlight Creative on Vimeo.

emily said…
wow, super-helpful post, David. You will reap the benefits of these labored thoughts as you read my upcoming book review & final paper, as they will be infinitely more coherent owing to these theses :)
11:07 AM

Anonymous said…
David,
Re: the first paragraph of this post - I hate you.

Unknown said…
I am convicted. I know that I have not always been careful with my definitions. I also think you are absolutely right in noting the contextual challenge that is inherent in the conversation.

w. david o. taylor said…
Brian, as best as I can tell, the answer to your question is both. You take these texts and set them side by side and quickly discover that very, very different conversations are taking place, assuming a wide and often contradictory range of definitions, methods, concerns, conceptual backdrops (that often remain invisible to the un-initiated), and reasons why any of it matters.

It goes without saying that I'm still learning this landscape. I imagine I might disagree with myself a year from now, certainly ten years from now. One day at a time, I guess.
1:02 PM

David Wright said…
Was drawn over here from an Image link on Facebook. Great process you describe, and some very useful 9.5 theses. Have you all read Elaine Scarry's On Beauty and Being Just (http://press.princeton.edu/titles/6675.html)? Worth checking out as well.
3:23 PM

w. david o. taylor said…
David, thank you for saying hello. Yes, Elaine Scarry's book would be an important contribution to the conversation, certainly when it came out, certainly for Christians, certainly for dialogue between the church and the contemporary art world. Some folks have found her argument problematic, perhaps too narrow at points, but we're better off because of its presence in the conversations about beauty.
4:08 PM

Jonathan Evens said…
I think that affirmation is a more helpful concept to us than beauty as, rather than separating out the beautiful from the ugly as in conceptions of beauty, affirmation seeks to see the image of God in all things.

∆ said…
After reading so many thinkers on beauty, mostly from the continental tradition but including the likes of David Bentley Hart, Daniel Siedell and Francis Schaeffer, I too think that thesis one is integral. So many people want to know what Beauty is from a Cartesian perspective. I love the idea that tradition is the most important aspect of any discussion of it.

In a conversation with my brother-in-law about Truth he revealed to me the reality that Truth isn't something to posses but to relate to through the person of Christ. Truth, then is relationship rather than an abstract idea. What then of the other transcendentals? Goodness? Beauty? Of course, we know them through relationship, too. Displace Christ from the focal point of that relationship and the nature of all three changes. One is effectively in a new tradition. My very definitions change based on my tradition and based on the centrality of Christ to the tradition. But as Hart might remark even those that shun Christ still point to him analogically through their polyphonic grammer revealing and underscoring the infinite God.

Thank you for all your contributions to the discussion. I always enjoy reading your posts both for the insights and the enchantment.
7:33 AM

w. david o. taylor said…
Jim, thank you for the confirming word. Am I correct in believing that you're behind the Continuum Arts website? If so, I've enjoyed my visits there and I quite the layout. Well done.
8:13 AM

∆ said…
Yes. I am behind Continuum. I'm blushing a bit. The layout is one easily installed (It isn't my own); it is a wordpress theme called tanzaku. If time allowed, I'd do more with it.

If time allowed I would have made it to ACT this past weekend. I do hope you'll post details.
8:44 AM

Bonnie said…
Thank you for this post. I sent it to one of my high school ( literature ) students to work on a thesis paper on beauty. Did you hear Makoto when he came to Duke April 1st?
8:23 AM

w. david o. taylor said…
Bonnie, I'd be curious what your high school student made of this. Yes, I saw Mako and a few us had the chance to go out for a leisurely dinner with him, where we all too often laughed ingloriously loud in a rather fine dining establishment.
11:29 AM

Amazing...
I teach High School Art and Creative Writing. Currently we are working through Thesis Statements. When we return from Spring Break I plan to have the class read this post, with assignments from the post to follow.
Thank you!
6:38 AM

Alex Humphrey said…
Wow. You have given me so much to think about. Until this moment I have always assumed beauty is self-evident. However, when I tried to define it I couldn't.
5:50 PM

w. david o. taylor said…
Alex, for what it's worth, I still find it a challenge to define beauty, especially if I try to do it in one sentence (unless that means a "Germanic" sentence, which makes criminally liberal use of commas).
7:32 PM