CWM: Songwriters II: What do they have to do with me and mine? 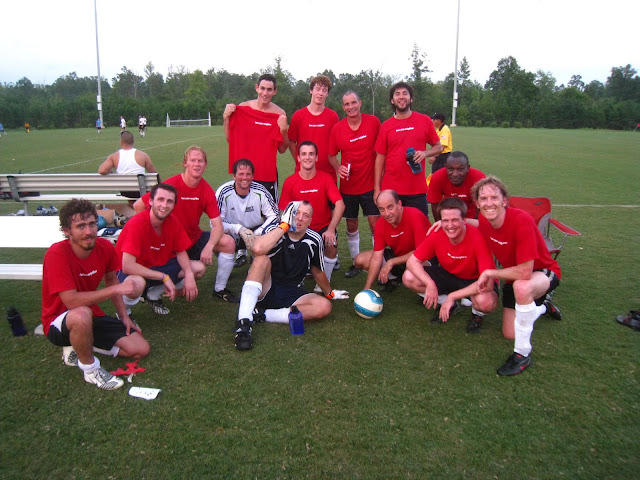 “A psalm drives away demons, summons the help of angels, furnishes arms against nightly terrors, and gives respite from daily toil; to little children it is safety, to men in their prime an adornment, to the old a solace, to women their most fitting ornament. It peoples solitudes, it brings agreement to market places. To novices it is a beginning; to those who are advancing, an increase; to those who are concluding, a confirmation. A psalm is the voice of the Church. It gladdens feast days, it creates grief which is in accord with God’s will, for a psalm brings a tear even from a heart of stone." -- St. Basil the Great (330-379 AD)


The above photograph has nothing to do with the following entry. It's 100% in honor of my older sister, Christine. Christine, who lives in Austin, Texas, along with her fine husband and fantafabulous kids, worries that my blog has gone to the academic dogs. That's an exaggeration of course. But, yes, I've found myself writing more about school-related stuff, less personal. It's not that I'm trying to hide. I'm not. The No Good, Terrible Day was a way to say, hey, it sucks to be me (today at least). But there are only so many units of energy I can allot to blog-writing and it just so happens that I get jazzed about ideas--and how ideas make the world go round.

So in honor of Christine, and because I love her beaucoup, here is a brief registry of personal info.

Yesterday I squished a caterpillar that had tunneled through three of our fat tomatoes. I pledged a pox on it right there--and on any members of its species who threatened to rob our whole crop. Sunday I crushed my ankle playing soccer for the city league I recently joined. Yesterday I led my first TA group at Duke. I told them that food and drink were essential to sound theological work. I asked if any of them was allergic to sugar. Everybody shook their heads. I told them that brownies would be coming soon. I have no car this week. My car was sent to the automobile "retirement center" because of a foul hit and run that resulted in a totaled-out verdict. I made carne guisada on Monday. I don't like Verizon's phone service, at all. Phaedra wants to get chickens. (David wants Christine to get on Facebook.) I'm going to buzz my hair off later this month (Phaedra's request). I really like my rector and his wife. Did I say I was playing soccer? Yes, well, it's the beautiful sport, as Pele once said, and I haven't played it competitively in twelve years. I don't like losing. I need to call the pest control people again. Phaedra and I need to send out our support/prayer letter. We're starting up an artists gathering at our church. And Phaedra made a pumpkin cheesecake that I'm eating slowly--too slowly, I imagine, for Phaedra's taste. Oh, and she canned 19 jars of brandy fig jam. Yum. YUM. Yummmmm.

Alright. Christine, I love you.

And now back to contemporary worship music report. Continuing a few thoughts on CWM, I'd like to post a two-parted entry. This will be part one. Part one happened here. All of this of course is related to the talk I'll give at the CFCMC.

WHAT DO THEY HAVE TO DO WITH ME AND MINE?

Or translated: What does the rest of the church have to do with me as a songwriter and my worship songs?
Let me begin by posing two questions to liturgical songwriters. By liturgical songwriters I mean those who write songs for the church’s corporate worship. If somebody else has used this term, I have yet to come across it. The term may very well be a neologism. I avoid the term "church musician" because of the broad range of musical experiences that it encompasses, from organ preludes to "special music." I also stay away from the term "worship songwriter." Worship, as we well know, can imply diverse contexts, whether "Sunday morning" or "the whole of life" or otherwise, and my point is to speak specifically about the context of corporate worship. With that said, let's continue with our questions.

The two questions that I'd like to pose to anyone who generates songs for corporate worship are:

1. When you sit down to write a song, who are the people that inspire your work?

2. How do you know that you have written a right song?

I recognize that these are not the usual questions that songwriters get asked. Why do I ask them? Because I find that they perform a helpful diagnostic purpose. They open up for us ways to see afresh the calling and responsibility of liturgical songwriters. The first question raises the aspect of ecclesiology, in this case, how a songwriter conceives his or her relationship to the church. The second question raises the aspect of theology proper. In what way or at what point do songwriters know that their corpus of songs has “glorified God”? Let me take each question in turn--one now, one in a future blog--as we set the stage for a larger constructive dialogue between the Psalter and CWM songwriters.

Question 1: When you sit down to write a song, who are the people that inspire, or perhaps we should say in-form, your work?This first question here pries open the role that a songwriter imagines the church playing in his or her work of creating music for corporate worship. Two distinct parts need to be discerned in this question.

Part one of our first question, then, asks to whom a songwriter feels a sense of primary allegiance.

Alternatively, does a songwriter sense a responsibility to write songs inspired by and in service of the global church, with a respect for the unique concerns of other cultures? Or, finally, does a songwriter feels no strict responsibility to his or her primary community except insofar as the community provides a social location for the creation of songs? The songwriter in this case may sense a higher allegiance to God, irrespective of the community’s decision to embrace the new music.

Granted, several of these options may be at work in a songwriter's mind, in different instances and at different points in his or her life. But I would still conjecture that one will likely operate dominantly throughout.

In summary, our first question involves a two-part investigation where we seek to discern whom the songwriter perceives as a primary community and what functional authority this community is seen to exercise in the songwriter’s work. I suggest that neither part of this question is neutral.

Why does this question matter?
It matters because it serves as an orienting framework. By this I mean that it opens up for us a way of seeing, on the one hand, the way a liturgical songwriter conceives the relationship--and therefore responsibility--between his or her work of songwriting and the church and, on the other, the ways in which his or her songs might significantly form the churches that make use of them. This is another way of saying that songwriters possess a great deal of power. Their songs give shape to an ecclesial identity and form the way Christians view the Triune God.

And this of course relates to our second question. But for that, we'll pause for another occasion and hear at this point a word from our non-local sponsor: Aurelius Augustinus Hipponensis, also known as the good Saint Augustine of Hippo. I'll also leave you with a nice picture of me and my sister Christine. Oh, lastly, this is good and this is cheeky but fairly useful too. 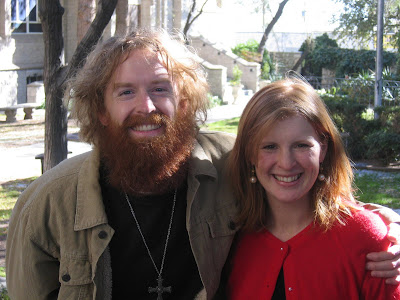 Epic said…
1. I read your blog post and enjoyed it.

2. I read the Cardiphonia blog and also enjoyed it as well.

3. Have a great weekend!

2. Bruce does a great job over at Cardiphonia.

3. Any artistic interests on your end?

w. david o. taylor said…
Josh, love it. Read it and really appreciate how you've put things. Thank you.
11:14 AM

Epic said…
Your question is too kind, snapshot is as follows:
Creative interests are plenty!
Practical, faith based outlets for said interests... fewer...
Questions regarding creativity serving the liturgy, many. :)
(This post format brought to you by Master Card)
3:51 PM

Greg said…
Great post. Good things to talk about among those who write songs in my community. Lingering question, however - why would you let your hair grow shaggy in the summer and then shave your head in the fall?
8:36 PM

w. david o. taylor said…
Marc, thanks for the answers.

Greg, in answer to your question, well, it's a riddle to me as well. It's become a strange habit over the years. I grow hair out over the summer, I shave in the fall or winter. Just to confirm your observations--I kid you not--today Phaedra will shave the hair off my head. It's been planned for a couple of weeks now. Nothing to do with songwriters, of course, but it keeps life interesting.
6:14 AM

Marcy Muser said…
Bravo to Christine for asking for personal info. I only have one beef with your personal description - David, you KNOW "soccer" isn't the right name for what you play! The whole world (except the USA) knows that game is rightly called "futbol"! :)

Otherwise I love the personal touch, including the photos. The bottom one vaguely reminds me of someone - can't imagine who - oh, yeah - your dad! (BTW my brother Mike also has a similar hairdo and sometimes a beard - what IS it with you two?) ;)

Please give my "saludos" to Christine - and to Stephanie, too. You all are inextricably linked to my childhood memories of Guate. BTW have you been following the landslides there? We are praying for them as I guess it's been a difficult few months.
4:09 PM

w. david o. taylor said…
Marcy, thank you for your note. I will happily pass along greetings to my sisters. We all have very fond memories of our years in Guatemala, for which we frequently pray.
5:08 PM