My IAM podcast and 3 quotes 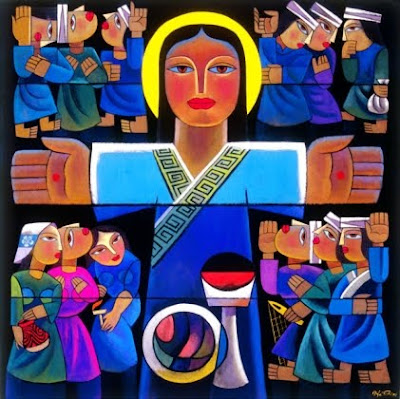 I have officially entered the crazy zone called "finals." Regrettably this means I have margin only for eating, sleeping, emptying the bowels, reading, studying and writing. And, yes, having some good conversations with Phaedra. And, well, maybe a few episodes of Project Runway (season 6), where "one day you're in and the next day you're out." But there's definitely little time for blogging.

I thought, however, that I'd drop here a few things. One is a podcast that Christy Tennant from the International Arts Movement recorded yesterday. I had such a fun time talking with her. She asked me all kinds of questions--from how I became an "arts pastor" to what I think about churches who seek to be "arts churches." You can hear the podcast here. Many thanks to the lovely Christy, who I think is doing a tremendous job over at IAM in the heart of New York City. Oh, also, do check out her other "IAM Conversations." They're quite good, including, I am happy to say, the podcast prior to mine with the fabulous poet Billy Collins.

Here are three things I've read over the past couple of weeks. I've been chewing on them ever since.

MUSIC & ITS CAPACITY TO TRAIN OUR EMOTIONS

“Typically, our emotional lives are messy. They are often confused and transient; they are tangled, come and go, jump out at us at odd times.... Many have borne testimony to the fact that music can help us discover more fully not only what we do feel but what we could or even should feel. To be caught up in the music…is to be caught up in emotional patterns that may be unfamiliar—we may never have felt these things before, or perhaps we have never felt them so deeply.

Just as our muscles are toned in a workout in the gym, so some music can, so to speak, give us an emotional workout (‘I never knew I had those muscles there’; ‘I never knew I could feel that way’) To put this another way, music can play its part in educating, shaping, and reshaping us emotionally. Is this not what the greatest hymns and songs do? They not only help us sing what we already experience emotionally; to some extent they also educate and re-form our emotional experience.” -- Jeremy Begbie, Resounding Truth, 302

"Modernity promised us a culture of unintimidated, curious, rational, self-reliant individuals, and it produced . . . a herd society, a race of anxious, timid, conformist 'sheep', and a culture of utter banality." -- Robert Pippin, Modernism as a Philosophical Problem, 22

HURRY UP AND WAIT

"The anxiety to bring the future about is the cause of the frantic rush that is one mark of the modern failure to live serenely in time. Projects and lives are not allowed to mature in their own time, but must be catapulted into the future with ever increasing desperation because, as is well known, the future never comes." -- Colin Gunton, The One, the Three and the Many: God, Creation and the Culture of Modernity, 90

BONUS QUOTE #4: THE TYRANNY OF TIME

"Having consciously shaped our desire in certain new directions, we become further shaped by the very mechanism created to achieve those desires, and the mechanisms in turn create still further desires that we seek to satisfy. . . . Clock time has become tyrannical and all-pervasive. Our pattern of life is largely controlled by the clock and calendar." -- Robert Banks, The Tyranny of Time, 126-127

"Why does it seem to be to even the most sensible women, if not an act of lese majesty, at least an impossibility to be 'old-fashioned'? Who wants it this way? The particular industry that tirelessly makes money out of it and whose kings, we are told, reside especially in Paris? But who has made these people the kings?" -- Karl Barth, Church Dogmatics, IV.4, 229