Von Balthasar and the Legend of Speedo Guy 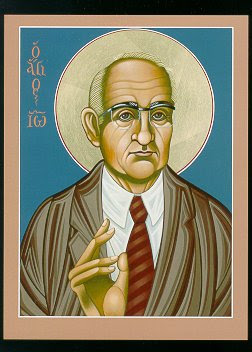 All I'll say is two things. One, I love the way Hans Urs von Balthasar, the Swiss theologian and priest of the mid-20th century, captures the dynamic of Christian faith in the statement below. His use of theater as a metaphor isn't original. Others have made fine use of it--N. T. Wright, Sam Wells, Kevin Vanhoozer, even John Calvin with his notion of creation as the theater of God's glory. But von Balthasar, like all great statements, articulates the best of theology in the best of poetry.

Two, while I'll always remain loyal to the University of Texas Longhorns (may they win the national championship), I'm digging the school spirit, er, fanaticism, of Duke. The video I've included here expresses some of that enthusiasm. It's a moment of history that few of the Blue Devil faithful will forget.

Oh, one more thing. I have to say I profoundly admire what the Speedo Guy did. I'm also envious. I would have done it if I could. Maybe I will--though coach K's injunction prevents the likelihood, which, of course, my wife will find to be a great relief. But c'mon, the guy's current occupation just makes the, uh, theatricality (to the glory of God?), all the sweeter.

Hans Urs von Balthasar on the Play within the Play

"The good which God does to us can only be experienced as the truth if we share in performing it (Jn. 7:17; 8:31f); we must "do the truth in love"... not only to perceive the truth of the good but, equally, to embody it increasingly in the world, thus leading the ambiguities of world theater beyond themselves to a singleness of meaning that can come only from God. This is possible because it is already a reality for God and through God, because he has already taken the drama of existence which plays on the world stage and inserted it into his own quite different 'play' which, nonetheless, he wishes to play on our stage. It is a case of the play within the play: our play 'plays' in his play."

The Legend of Speedo Guy

tamarahillmurphy.com said…
this is HILARIOUS! (oh, speedo guy is pretty funny, too)
4:50 PM

Jane Bryant said…
only you would connect von balthasar and speedo guy and somehow make a very holy statement - i am pondering in awe, no i am laughing, no i am watching the play of plays in a play of plays - lets play!

Alan said…
You could have quoted someone who said, "art is dumb" and that would still have been a totally hilarious and uplifiting, albeit strange post!

Kathleen Borkowski said…
I can tell you are inspired by inhibition in the form of public dancing :D
8:00 AM