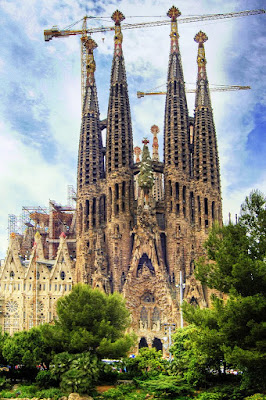 Dorothy Sayers
I've begun reading Sayer's Christian Letters to a Post-Christian World. Edited marvelously by Roderick Jellema, they represent some of Sayer's best essays, everything from her satirical "The Pantheon Papers" to "Towards a Christian Aesthetic," the latter of which might be one of her best known in art circles. Sayers was a writer of detective novels, the translator of Dante for Penguin Classics, a lay theologian and apologist in the vein of Chesterton, a fan of motorcycles, a playwright, and a member of the Inklings group.

One of the paragraph's I read today in Jellema's introduction bears quoting in full.

"The theological nitty-gritty is what she is after. A character in one of her novels demands to know why a benevolent God 'put such a lot of bones in kippers'. That is the level at which Dorothy Sayers likes to work with things. Her theological talk has always the concreteness of art. The Incarnation, for example, is that part of the exciting story of the world's history in which 'God takes his own medicine'."

With titles like "The Dogma is the Drama," "Strong Meat," "The Other Six Deadly Sins" and "The Faust Legend and the Idea of the Devil," Christian Letters will be the perfect Saturday morning reading throughout the fall.

Flannery O'Connor My good man James Chapman sent me a link to a CNN interview with the author of the latest Flannery O'Connor biography. I was especially struck by a couple of the comments Brad Gooch made about O'Connor. One reminded me yet again how fundamental finding and keeping a discipline is to success as an artist. Without a habit of discipline I can't see how any of us can expect to grow, discover, change, deepen or flourish artistically.

The second comment made me think of Dallas Willard. With Willard, it's all about heart renovation. A heart that's not renovated cannot produce good fruit. Origen and Augustine said much the same but in Greek and Latin and a long time ago. Of course, it's more complicated than a simple aphorism. What do we mean by renovated? When do we know when we're more renovated than not? What are the signs of good fruit?

Still, the point remains: Good trees will usually bear good fruit, and sick trees will usually break down and make far less art than they ever imagined they would, and thus shame will compound failure to squash all bravery and joy from their hearts. Or they will make all kinds of public fruit at the expense of--or in denial of--a profoundly wounded heart, while the rest of us may never know or care because we enjoy vicariously the public ornaments of their success. And again, it's more complicated than that. The point is simply that our character plays a considerable role in our development and flourishing as artists.

Back to O'Connor. Here is Mr. Gooch's remark, responding to the interviewer's observation, "It's amazing that she had a literary career at all, given how debilitating her illness was." Gooch says:

"What became inspiring to me, unexpectedly, writing this book [was how she dealt] with her illness, and that she finally was nobody's victim.... Everything we think of as a Flannery O'Connor story came after she had been diagnosed as having lupus and settled in to life in the South. You get the sense that this was almost a magical thinking, where she thought that writing these stories was keeping her alive."

1. "The Tale of Despereaux": I remember reading that many critics felt this movie didn't do justice to the source material by Kate DiCamillo's Newberry Medal-winning book. I haven't read the book so I can't comment on that point. But the film was gorgeously rendered. In fact, the directors explained that they implemented three distinct art historical styles into the visual palette of the movie: Vermeer, Hieronymus Bosch, and Pieter Bruegel. We also found the voice talent very finely done. All in all: delightful and visually tasty.

2. "Coraline": Think a cross between Hans Christian Andersen and Edgar Allen Poe, and you'll get a good sense of what this Gothic animated story is like. It's not for children per se, but goodness me, Phaedra and I were kept enchanted till the very end of the movie. We kept saying "Wow...wow, wow, wow" afterwards. This is one of the few movies where I found myself on the edge of the couch, continually wondering, "What's going to happen next?"

3. "Becket": In this 1964 movie, Richard Burton as Saint Thomas Becket squares off against a manic Peter O'Toole who turns in a masterful performance as King Henry II. We couldn't remember the last time we'd seen a two and a half-hour movie that included so much time devoted to priests singing, priests saying Mass, priests being consecrated as archbishops, priests praying and reading and talking to God in the most human way. It was perfectly divine. After having just read Eamon Duffy's Stripping the Altars, I felt keenly the terrible religious drama that England had endured in the centuries around the Reformation. "Becket" the movie only won one Oscar, though it was nominated for a thousand. It won for best screenplay, and I have to say, O'Toole's lines are some of the most 'licious, sassy lines I've heard on the silver screen.

Righteous Architecture
I picked up the latest copy of FAITH & FORM in the library this past week. On the cover was an image by the photographer Thomas Schiff. Again: gorrrrrrr-geous work. See here for a 360 virtual tour of architect Gaudi's Colonia Guell Church. See here for more images of Gaudi's Temple Expiatori La Sagrada Familia in Barcelona. And at bottom is my grandmother's gingerbread house. 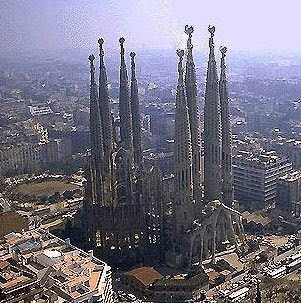 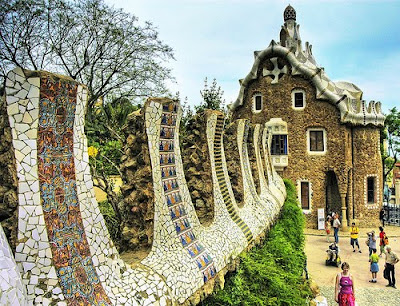 sam said…
we also loved coraline... although the part with the spiderweb still gives me the heebie-jeebies.

check out these great making-of videos:

Kelly W. Foster said…
If there's anything I keep up with it's kid's movies - mostly because I don't have to get a babysitter to see them. And they often have a level of craftsmanship that's better than more grown-up fare. So . . .

I agreed somewhat with the critics about Despereaux. I thought the story and the characters seemed pretty half-baked. But I was still mesmerized by the look of it. Truly outstanding design and animation throughout.

I had no reservations at all about Coraline, though. It really is a stunning piece of cinema. My kids are a little older and are pretty bookish so the fact that it was darker and slower than most animated movies didn't bother them at all. They loved the movie and are still talking about it several months later. If you didn't get to see it on a big screen in 3d you missed out on an even more excellent experience.
10:12 AM

Jake T said…
FYI, at my library, "Christian Letters to a Post-Christian World" is now called "The Whimsical Christian."

w. david o. taylor said…
Kelly: that's great. I did see the note about a 3D experience of CORALINE, but regrettably we had no pair of red and cyan glasses handy, so we settled for a 2D experience, which was creepy in its own special way.

love the architecture! And I LOVE that collection of Sayers' essays! I think it used to be published under the title: Letters to a Diminished Church.

hope you're having the time of your life at Duke!
2:00 PM

BW said…
As for O'Connor - one can never say enough about her, can one? Thomas Merton: "When I read Flannery O'Connor, I do not think of Hemingway, or Katherine Anne Porter, or Sartre, but rather of someone like Sophocles. I write her name with honor, for all the truth and all the craft with which she shows man's fall and his dishonor."

“Flannery O’Connor is the first major Christian writer this country has produced...we have not yet begun to fathom the depth of her literary and theological witness. Which is to say: we have not yet comprehended the real power of her art.” – Ralph Wood

High praise with which I can do nothing but agree.

And from the sardonic Southerner herself to your point:"Art is the habit of the artist; and habits have to be rooted in the whole personality. They have to be cultivated like any other habit, over a long period of time, by experience; and teaching any kind of writing is largely a matter of helping the student develop the habit of art. I think this is more than just a discipline, although it is that; I think it is a way of looking at the created world and of using the senses so as to make them find as much meaning as possible in things." Whew. There's a workshop full of material there, eh?


And, if you liked Desperaux the movie, you really should read the book - wonderful language and, of course, much better than the movie.
2:36 PM

w. david o. taylor said…
Adam: whaddup! I'm having a good time here in blue devil land. I told Phaedra yesterday that I'm consciously needing to resist the thought that I should be doing something more "productive" than sit in a library all day long, reading, thinking, reading, note-taking, and reading some more, hoping that it will land somewhere fruitful. If I remind myself that this is how scholars "do" productivity, then I'm ok. But after nine years in pastoral work, it's a hard mental habit to break to think of pastoral activities as more "productive" than scholarly ones.

Of course, when I think of how much I enjoy the fruits of scholars, then I assign myself penance for thinking such a foolish thought: 100 push-ups on the library floor and 50 Kyries.

Ok, MUST get Despereaux book.

Essentially Heather said…
Missing Barcelona and all the beauty within her at this very moment. Sigh. Oh to have more Gaudi architecture in my present world.
8:56 PM

Unknown said…
Love your Blog! I have a Christian art blog..

Check it out when you get a chance!
Mega Blessings.
Stephanie Green
stephaniegreenart.com
3:23 PM

Anonymous said…
i'm half way through the gooch biography. it's great. ralph wood's CHRIST HAUNTED SOUTH is close to next on the list, but i gotta read LET THE RIGHT ONE IN first.

Stephanie: very nice to e-meet you.

Hamster: Thanks for the book recs. It's always great to wind of a new volume and Wood's book sounds great.
4:43 PM

w. david o. taylor said…
Ok whoops. Phaedra had logged into my gmail. I jumped on my blog, wrote that last comment and posted it, and only moments later discovered that "PhaedraJean" had written these nice notes to strange people. That would be me in the previous comment.
4:52 PM