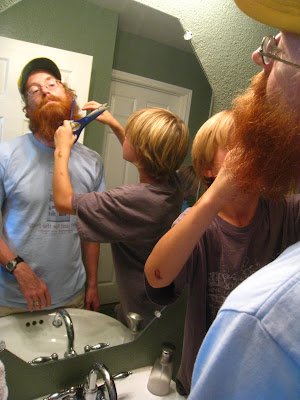 You never know what you'll find when you pack your house for a cross-country move. I found a paper I wrote at Moody Bible Institute on rock'n'roll music (scary). I found a 374-page screenplay titled, "The Love of God," that a stranger had sent via mail to my office at Hope Chapel for my consideration (it was bad and at one page per minute, that would translate into six hours of bad movie). I found the results of my Foreign Service exam (very strange feeling--almost a lifetime ago--I passed but, still, I have very little emotional relationship to that part of my life--so strange).

This morning I discovered a list of Packer quotes in a manila file. My last year at Regent College I decided I would collect as many as I could. I'd TA'd for him for three years, so I knew he produced aphorisms like a latter-day Yogi Berra. I asked staff and fellow students to send me their favorites. One day he would be no longer with us. We might as well capture the Packerisms while we remembered them.

Here are a few that I retrieved off of an old student newspaper, dated April 21, 1998.

(Explaining the quick and the dead): "They say that in New York if you're not quick you're dead."

"I'm not going to object if you want to admonish me spiritually in your term paper."

"It's one of these Packer alliterations which make some people happy and give other people indigestion."

"I love you and leave you and wish you a very happy Tuesday evening."

"Jesus Christ is the Atlanta Airport...through which everything has to go. Well, you know, they say in Texas that you can't even get to heaven without going via Atlanta."

"If you don't want coffee, perhaps to jump up and down a bit might wake you up. Who's to say? Try it and see."

"Chickens, return to the coop."

#2. Eugene Peterson with a few sharp opinions about pastors, artists, and commercialism.

I love listening to this interview. It really cracks me up. Eugene doesn't give a hoot about anything any more. He's old, he's put in his time, he's thought carefully about his opinions and convictions, and he's had it up to here with certain kinds of pastors. I confess, though, that I freaked out just a little. I thought, "Eugene, what the heck are you doing? We're trying to persuade pastors to come, not repel them."

This interview cracks me up, further, because Eugene is the worst radio interviewee. The DJ asks him a question and Eugene just sits there on the line, thinking, thinking, thinking. The result is radio silence. That of course is the very worst thing that could happen to a DJ, whose job is to fill every second of air time with something--anything but silence.

I offer you here a little taste of my life last March as I pursued every opportunity to promote the symposium.

Finally, here's a link to the sermon I gave last week at Christ Church Anglican. My lavalier mic went out in the middle of my preaching. I didn't realize it in the moment. The soundman patched me through a podium mic and I, unconsciously, projected with my diaphragm. Thankfully he was able to capture most of my sermon.

The goal of my sermon (which the soundman, to my amusement, titled "We Need Art!") was to help the congregation understand three ways in which art helps us to appreciate specific aspects of the gospel that we may not perceive otherwise. My three points were: 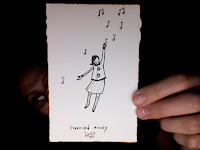 It's pretty straightforward stuff, nothing new really. But I like the sermon because it's a congregation-friendly, widely accessible talk. If I stood in front of any congregation and could only say three things on behalf of the arts, I would give this sermon.

A last note about the first illustration that got chopped off. I start out the sermon by handing out Jelly Belly jelly beans to the entire congregation. I then ask people to tell me what flavors they're tasting. That's where the audio picks up. It takes a little while for the audio to adjust, but there you go.

And now back to packing our house.

I leave you with a picture of Phaedra and me. Our nephews celebrated a joint birthday recently, with their chosen theme being "military." So Phaedra and I dressed the part. Here we are standing smart in my parent's backyard. I don't think the US Army would let me keep my beard, but I bet Che Guevara would. Phaedra looks like she'd make you drop and do twenty without a moment's hesitation. 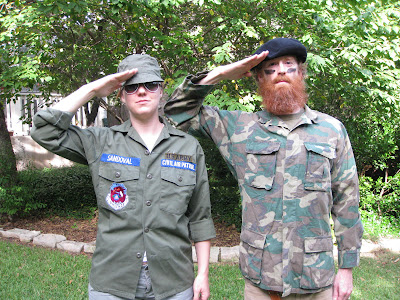 I must admit your military salute with the full red beard makes you look like your apart of the Scottish Highlands regiment! All you need is the kilt and the upturned hand and you would have it down pat.
Looking forward to connecting with you in the coming year.
10:34 AM

w. david o. taylor said…
Daniel, one of these days Phaedra and I will get a chance to live in the country of her childhood. Then I'll check if they have any open spots in the SH regiment.
9:42 AM

Andy Rowell said…
Love the Packer quotes. Thanks. I remember them and remember your running list.

I look forward to hearing Peterson.

w. david o. taylor said…
Andy: I look forward to sharing common space with you again. It'll be great. Thanks for all your help thus far.
9:01 PM