A Word from Jacques Maritain to Michael Jackson 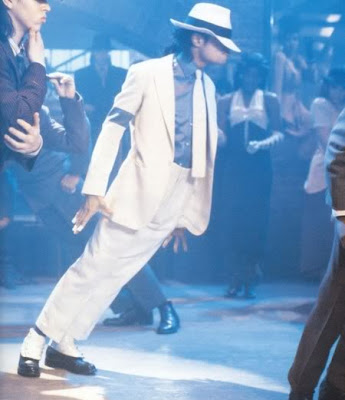 Why is it weird that Michael Jackson has died? Miriam-Webster defines weird as "an unearthly or supernatural strangeness, or it may stress queerness or oddness." Weird things usually land somewhere between the boundary of Normal and Supra-Normal. The "King" of Pop dies in debt. That's weird.

The Most Successful Entertainer of all Time, according to Guiness World Records--13 Grammy Awards, thirteen #1 singles, the sale of 750 million records worldwide--never learns how to be an adult. That's weird.

On November 21, 2008, Michael Jackson, in the presence of Yusuf Islam (formerly known as Cat Stevens), converts to Islam. That's weird, weird because it follows no clearly discernal logic of human behavior. What did all his facial surgeries produce? A sad and unearthly strangeness. Or in street speak: creepiness.

The parents of one of the most powerful artists of our day question whether their son died with a valid will. The fact that his family is squabbling over what kind of funeral to hold for Michael just makes things weirder, not in a weirder-than-other-normal-family-funeral weirdness, just weird in its own hyper-exposed way.

Both Michael and Farrah, both haunted by their alter ego in the pin-up poster world, lived a pathetic life, chock full of pathos. The NYT writer notes this about Farrah: 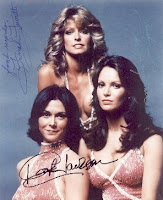 "A scrim of sadness covers Farrah Fawcett's career. Her stardom traced that cautionary Hollywood arc: meteoric fame followed by years spent trying first to overcome it, then, too late, seeking to recapture it."

I feel sympathy for the way that Farrah might have felt tossed around like a puppet in the Hollywood machine. But I equally feel it's pathetic to see her try to recapture fame. Did it not terrify her the first time around?

After his 2005 child abuse trial, Jackson flees to Bahrain to hide away from the oppressive glare of the public eye. The public eye wanted to behold him, like a god, night and day. They wanted to know what Michael ate (strictly vegetarian), what he wore (rhinestone-studded gloves), how he parented (lovingly, apparently), how he failed (multiply just like Us), the amount of money he spent on vacation ($10,000 for in-flight goods on Swiss Air) and the way he dealt with regret (he built the Neverland Ranch). The man adored by millions hid from them by lodging with sheikhs in the Middle East.

In his music he bridged ages and races. He danced with the energy of James Brown and the grace of Fred Astaire. He redefined the music video. Elizabeth Taylor named him "The King of Pop," while George H. W. Bush proclaimed him "Artist of the Decade" for the 1980s. The American Music Awards honored him as Artist of the Century. The German-based Hubert Berda Media conferred on him the Pop Artist of the Millenium Award.

Humans cannot bear the weight of this kind of mass adoration. Nor are humans meant to give anyone but God their total devotion. When we place our adoration on another human being, we crush them with our neediness. When a human being seeks this kind of adoration, it disfigures them.

Jesus once said, "What does it profit a man to gain the whole world yet forfeit his soul?" Michael gained the whole "world," yet it came at the cost of his own anxieties and obsessions. And to what extent were we his audience complicit in the forfeiture of his soul? Perhaps more than we're willing to admit.

To my mind, it is a basic question of health. What does it mean to be a whole and hale and even happy, healthy artist? 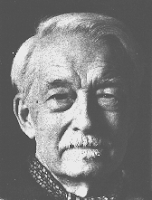 I believe a healthy artist is one who is integrated and fruitful. That understanding comes out of my reading of Genesis and the Gospels. But I like how the French philosopher Jacques Maritain (1882-1973) puts it. In his essay "On Christian Art," he says to talk of Christian art is as if we were to talk about the art of the bee or the art of man. Christian art is nothing less and certainly nothing more than "the art of humanity redeemed."
"It is implanted in the Christian soul, by the side of the running waters, under the sky of the theological virtues, amid the breaths of the seven gifts of the Spirit. It is natural for it to bear Christian fruit."

By nature we are all of us broken. But grace heals our wounds. And but for the grace of God, any one of us could end up as profoundly disoriented as Michael or Farrah.

Echoing Augustine, Maritain locates the specific identity of Christian art in the interior life of the artist. The art of redeemed humanity, or the Christ-transformed humanity, cannot be limited to any particular kind of object or style. On the contrary, as Maritain insists:

"Everything, sacred and profane, belongs to it. It is at home in the whole range of man's industry and joy. Symphony or ballet, film or novel, landscape or still life, vaudeville or opera, it can be as apparent in them all as in the stained-glass windows and statues of churches."

On this understanding, the movie The Apostle, in which Farrah plays 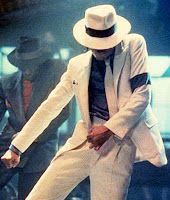 the neglected wife of a Pentecostal preacher, or Jackson's, call me crazy, famous Moonwalk could be regarded as Christian. How so? The movie shows sin as sin and grace as grace and neither are made easy for us. Michael's dance move is fun, athletic, silly, mesmerizing and as unnecessary as grace. The songs could stand on their own. But adding dance introduces an excess of joy; and if grace is anything, it is an excess, among other things, of God's joy.

What is it that secures us as artists? What is it that protects us from turning our gift into an idol? How do we guard against the crushing weight of our own power as artists, our power to create and our power to influence? Again I believe Maritain gets it right. The art of humanity redeemed will be powerful and beautiful, he says:

"only on the condition that it overflows from a heart possessed by grace. . . . And if the beauty of the work is Christian, it is because the appetite of the artist is rectified in regard to such a beauty, and because Christ is present in the soul of the artist by love."

The work will be Christian, he adds, "in proportion as the love is alive." This isn't a feelings-based love. This is the love of Christ, humbled and broken, and thus both beautiful and powerful.

How then do we pursue a healthy and fruitful life as artists? Maritain answers: seek to be a saint. You will be a great artist, regardless of your productivity, if you seek to be possessed by love. That is what it means to be a saint, to live in love, to live with and to be possessed by Christ. Then, Maritain insists, the artist "may go and do as he likes." Make your vaudevilles. Dance your moonwalks. Sink yourself fully into the neglected wife of a Pentecostal preacher and find Christ there.

I'm sad both Michael and Farrah have died. There's nothing I could ever do to prevent their death of course. We all die some day, famous people included. But I'm sad all the same. I was a Jackson fan in the '80s. I've attended a Michael Jackson dance party or two. I'm sad for the loss, the loss of their presence in the art world and the loss of so many things I imagine they wish they could have recovered over the course of their lives. “I never had the chance to do the fun things kids do,” Jackson once explained. “There was no Christmas, no holiday celebrating. So now you try to compensate for some of that loss.” Farrah lost the integrity of her physical body.

All I can do is pray. I can pray for their families. And I can certainly continue to pray for the artists I know, some of whom possess an uncommon giftedness, all of whom face the kinds of temptations, the "carnival of the uneducated passions," as Archbishop Rowan Williams puts it, that Michael and Farrah faced.

But for the grace of God, here we all go.

Anonymous said…
"How then do we pursue a healthy and fruitful life as artists? Maritain answers: seek to be a saint. You will be a great artist, regardless of your productivity, if you seek to be possessed by love. That is what it means to be a saint, to live in love, to live with and to be possessed by Christ. Then, Maritain insists, the artist "may go and do as he likes." Make your vaudevilles. Dance your moonwalks. Sink yourself fully into the neglected wife of a Pentecostal preacher and find Christ there."

I believe what you wrote in the above paragraph implicitly, though not always faithfully. Thank you for writing this, I believe it is the heart of the matter.
7:04 AM

w. david o. taylor said…
Michele, thank you for your note. The further I go along the more I see how much faith is required simply to be an artist, whether little or great. Hang in there.
10:35 AM

Mr. Douglass said…
a friend of mine remarked last week -- "hadn't those two been dying for years?"

it seems they have. i've wondered how many more breathtakingly important people, though less celebrated, are dying this year without so much as a peep or whimper. we live in a strange world.

good post.
i'm friends with ben/joy langford and graham/amanda davidson. we live over in college station. we feel austin's heat mixed with houston's humidity, but your blog is a welcome respite -- a refreshing five minutes.

Kari said…
thank you for your words. much to think about and a needed respite from the world's view on Michael's death.
2:26 PM