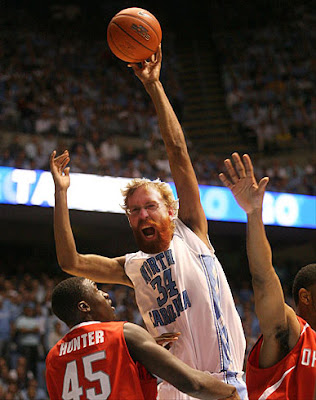 We're going to the National Autonomous University of Mexico!

We're going to the University of Alaska!

It's April 1 today and I feel lame for not coming up with something more clever than the simple truth. Phaedra and I finally decided. I'm going to Duke Divinity School and will study with Jeremy Begbie. We'll move to Durham, North Carolina, at the first of August.

This has been such a windy road. When I graduated from Regent College in 2000, I thought I'd land at St. Andrews University that fall. I'd be joining good friends in the cross-Atlantic trek: Matt and Julie Canlis, Poul Guttesen, Ivan Khovacs. By the end of that summer I realized I was exhausted. I'd been plowing through school for ten years straight, five undergrad, five grad. My brain was tired and I felt knowledge fat. I wanted to work out the ideas in practice. So I took up Hope Chapel on their offer of a full-time arts pastor position.

St. Andrews' Institute for Theology, Imagination and the Arts always beckoned to me. In my mind I had settled on a five year commitment to Hope Chapel. By summer of 2006 I'd board the next banana boat for the shores of King George.

Fall of 2005 rolled on and I felt a knot in my soul. I didn't feel right about leaving. I knew God wasn't finished with the work he was doing in my heart; not my head, not my skills set, but my heart. So much of my tenure at Hope Chapel was about connecting my head and my heart. I know Dr. Houston would be pleased to hear those words.

I gathered a few friends and family to pray. By the time we'd gathered I knew I needed to stay another couple of years at Hope Chapel.

Between then and June of 2008, I dated, got engaged and married Phaedra. I planned the Transforming Culture symposium. I transitioned the arts ministry at Hope. And I punted my departure date one more year so I could put to writing the things that I'd experienced as a pastor.

I prayed many, many years ago that God would not let me do my doctoral studies single. I didn't think it would take till 2009 for that prayer to come to pass. Strange the ways of God.

The brain, I figure, is like a complex of muscles and the work of graduate study employs specific mental muscles. I'm afraid mine have gotten soft. I read here and there. I study for sermons. I try to keep an alert mind. But I haven't been able to keep the disciplines of scholarship over these years of pastoring.

So I've put myself on a regimen this spring. The months of February and March I read my Greek Bible every morning. April and May I switch to my Hebrew Bible. I take my German Bible to church on Sundays. And when I drive around the city I listen to a tape series that Phaedra gave me as a gift: the Bible in Spanish with some very trilly Spanish guitar in the background. Yes, it's on tape. I'm hopelessly old school in my car.

Am I nervous about what lies ahead? Yes. Sure. There are a lot of unknowns. I don't know what will happen to us in four years' time. I'm afraid. I'm afraid of all the things I can't control. All I can do, really, is trust that God will continue to be our Good Shepherd. He's taken care of us thus far, empirical data notwithstanding at times, He'll take care of me and Phaedra through this next season. I take comfort in one of the verses we've been memorizing during Lent:

"Be joyful in hope, patient in affliction, faithful in prayer."

In the meantime, I'm down at the neighborhood basketball courts working on my killer hook shot. A friend of mine suggested I audition for a spot on Duke's perennially nationally ranked basketball team. I told him it was a great idea. I'd be the 36-year old, red-wild-bearded, white guy walk-on. I can totally see myself as a power forward with a sweet three-point shot. The photo (thanks to Taylor Martyn's prophetic photoshop powers) proves it incontrovertibly: I've got that Christian Laettner aggressive instinct. Now all I need is an agent. Maybe Jeremy Begbie could be that. I bet he's a English basketball fiend waiting to explode on the court.

Phaedra is totally psyched about loamy soil. And four seasons.

Blue Devils, here we come.
(Just received April 7: an amended photo much to my relief. The Tar Heels won last night. Come autumn, I will promptly acquire a deep-seated antipathy for UNC b-ball. Till then, I say kudos for the win.) 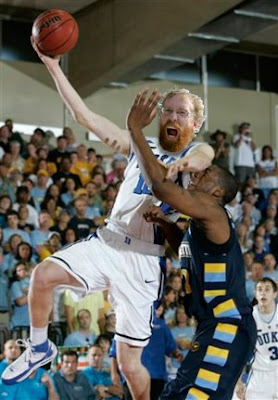 w. david o. taylor said…
Alright. I crack myself up. I'm so not from the great state of North Carolina where anybody with half a head would know in 2 nanoseconds that that jersey belongs to a DREADED UNIVERSITY OF NORTH CAROLINA TAR HEEL!

I've asked my good friend Taylor Martyn, who lives in the Sudan at the moment, to swap it out with a Duke Blue Devils' jersey.

Or maybe I've got something sly up my sleeve. Maybe it's a subversive ploy to jinx UNC's Final Four effort.

That's right. Turn on your televisions and watch for that new kid coming off the bench with that wild red beard.

Kathryn said…
so duke is on our side of the country! maybe we can find some way to hang out... and i have always admired their theology program! who will you study under?

emily said…
congratulations! we look forward to having you! I'm starting my MDiv at Duke in August.
9:35 AM

w. david o. taylor said…
Kathryn, I'll be studying with the very dapper Dr. Jeremy Begbie. It'll be nothing but a rollicking adventure.

On the same coast indeed.

Emily, thanks for the congrats. I look forward to meeting you in person.
12:13 PM

tamarahillmurphy.com said…
oh dear, you do realize that Duke blew out Binghamton University's maiden voyage to the Big Dance, right?? you might want to keep the whole Blue Devils thing under your hat when you visit next month...
6:45 AM

Jerrol said…
I am greatly amused by the photoshops.
1:24 AM