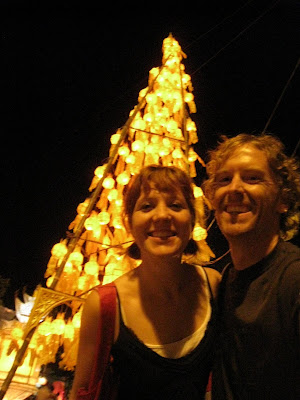 Phaedra and I have had a really great experience here in Thailand, first in Pattaya (aka "sin city"), now in Chiang Mai. We met with 250 mission leaders from over 50 nations and found them to be some of the most excellent, humble, funny, non-romanticizing-of-the-missionary-enterprise folk. Many of them have faced persecution and violence for believing in Jesus, and that can't help but put our own lives into perspective. We swam with a thousand carp. We ate spicy pig ear salad. We visited sapphire mines. We were taxied from the ocean-side, American-GIs-looking-for-"R&R" city of Pattay into Bangkok at an average speed of 155 klicks. That's 93 mph.

We've boldly biked down the streets of Chiang Mai alongside a madcap fleet of tuk-tuks, sam-lors (the three-wheel bikes), red song-tows (the "two-bench" trucky-taxi guys), mini-buses, cars, lorries, bicycles, the occasional fancy-pants government vehicle, and the ever-chortling, enthusiastic armada of scooters. And sometimes you see four people stacked on one single scooter.

And our president was elected whilst we drove deep into the forests of southeastern Thailand--where nobody really seemed to care about a up-to-the-minute electoral college count.

And the fireworks screamed and pounded the night sky into the early dawn hours.

And everybody, I mean everybody, we've talked to in Christian circles here--from a Japanese missionary couple working in the remotest northern region of rural Cambodia to a Brazilian pastor serving in Rio de Janerio--has mentioned HILLSONG worship music. It's become comical actually. No other group whatsoever has been mentioned, neither Integrity nor Vineyard nor Matt Redman or Chris Tomlin, let alone Indelible Grace or any other "high church" hymn-makers or that guy we used to hear about a lot in the early nineties, that Graham Kendrick guy. And definitely not John Michael Talbot. Or anybody from any other country of the world. It's like they've got their own multi-national machine going on down under. They've created some solid work along the way, "Shout to the Lord" as a golden-oldy and "Mighty to Save" as newer vintage.

But what worries me is not simply the emotivist/experientialist theology that underlies a good deal of their songwriting. What worries me is that for all their global influence they represent such a tiny fraction of the "sound" (theologically and musically) of the worldwide Body of Christ. Is it their fault they're so popular? I don't know that that's a helpful question. It may be the wonders of market forces at work. It may be no more than evangelical ecclesiology at its best and worst. I imagine Charles Wesley's hymnody at the dawn of evangelicalism in the 18th century produced plenty of strong feelings (in both senses). What's to do? I don't know. But it sure has been a curious discovery. Stay tuned.

In any case, we've seen plenty of beautiful art here in Thailand and thought we'd share some highlights. Needless to say, our imaginations are expanding daily. So is our love for the global church as it seeks to be faithful to the gospel in their respective places.

Here then is a kind of top-twelve art moments in Thailand. Let me begin with one of the most important images. (I believe if you click on the pics they'll become larger.)

1. The Toilet. You gotta know your options. 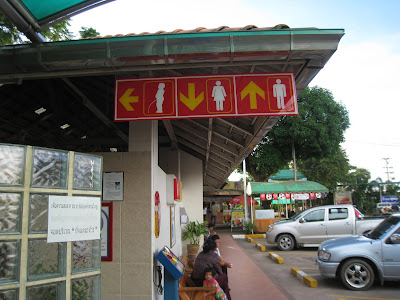 2. The Tokyo Airport.
We felt like we were inside a sci-fi set design as we walked the length of this corridor from terminal to terminal. 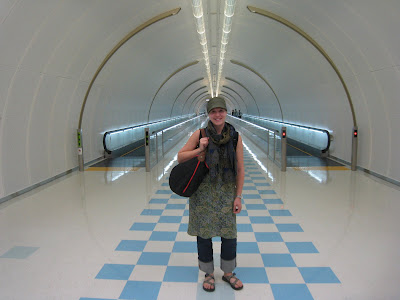 3. The Art of Exotic Flowers.
We visited a botanical garden full of orchids. They were gorgeous. 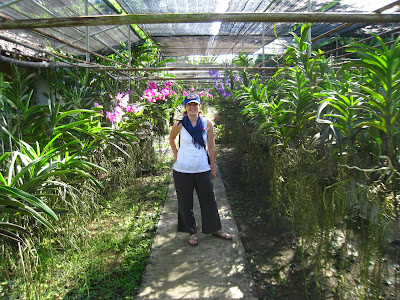 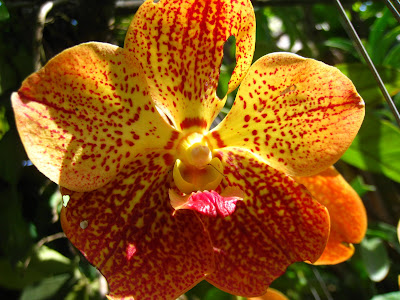 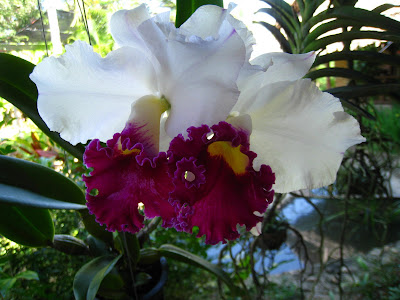 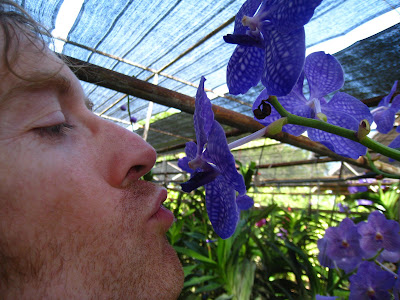 4. Thai dancing.
A group of believers danced for the opening of WEA: the Mission Commission's consultation. I confess all I saw was weird movements and vividly colored garments. I saw none of the symbolic meaning. If I have anything to do with another large gathering of foreigners watching an indigenous dance form, I'm going to recommend that they arrange for somebody to give a ten minute explanation of what's actually happening. That way we'll not be left with our vague and irregular appreciations of the formal aspect of the dance. Instead we'll be able to enter more deeply--maybe even challenged by--its cultural or even counter-cultural meaning.


5. Poo-poo Paper. Crap Sheets.
It's what we'll call the excremental gift of elephants to writers and artists.

[Phaedra speaking here]: Elephants eat a very fiberous diet! The result is a "product" that is ripe for paper making. The dung is collected and then washed 4 times in this big cement sink. After it dries the dung begins the long process of being boiled, bleached, beaten, washed again, dyed and then dried on screens to make big sheet of paper. If I had not been standing right next to a large pile of poo I never would have guessed it was poo-poo paper. And it's not even a bit sinky. In fact it smells kind of nice. :) 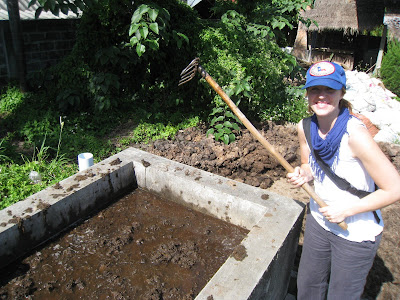 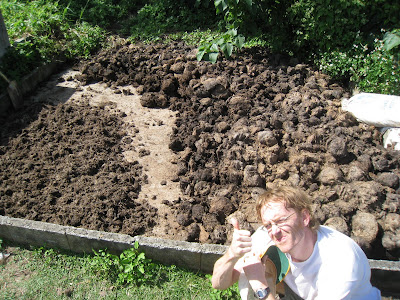 Me giving full approval to the dried poo that was once very wet. 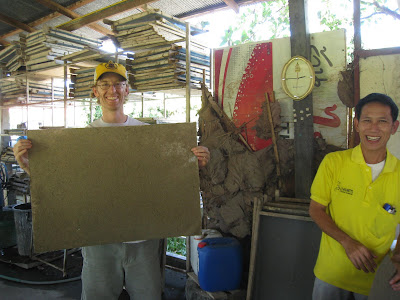 Me smiling very big with a final product: elephant poo paper. It's crisp!

6. Speaking of Elephants: elephants have feelings too.
Ever heard of the elephant who painted a tree? Or a stem of flowers? Or in the manner of abstract expressionists? Well, we saw the wonder with our own eyes. However do they train them? 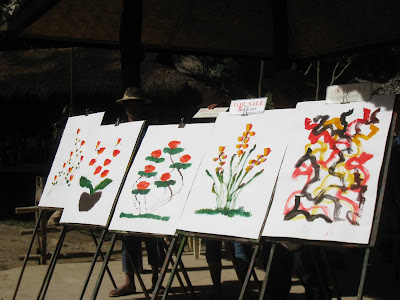 7. The Bangkok Airport: art everywhere and none of it "necessary."
We were thoroughly impressed with the investment that the Bangkok airport has made in art. Everywhere we walked we saw art. 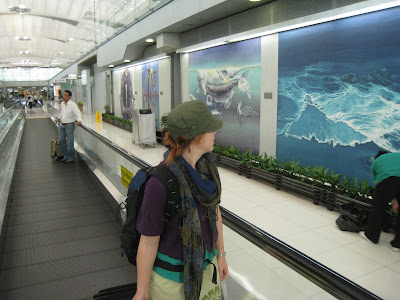 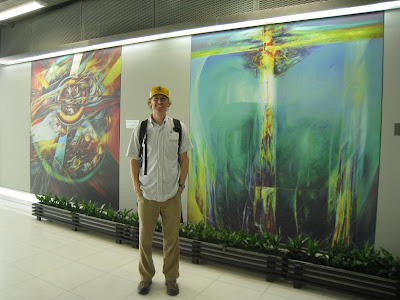 The art work on the right is titled "Incarnation" (2005). The artist credited with making it is Sakarin Kruer-on. The piece on the left is titled "The Symphony of the Universe" (1974, Pratuang Emjaroen). Here's a closer look. 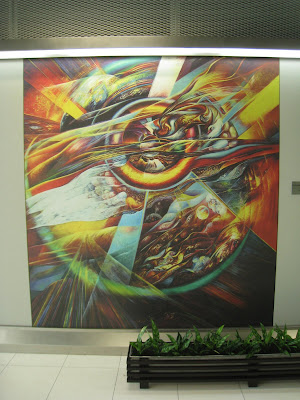 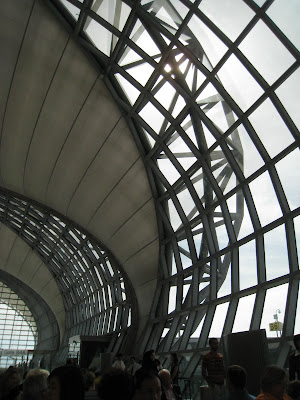 Sitting in the waiting area I looked up and this is what I saw.
8. Our "missions & art" track at the World Evangelical Alliance MC consultation.
Our "Missions and Arts" group, the small but feisty eight of us, had a fantastic time envisioning a renaissance of the arts through the global missions community. So much is already happening; we're just finding out about it. We'll share more details in the next missive, but for now our group wants to plan specific initiatives for Urbana 2009, the Lausanne Congress in Cape Town, South Africa, 2010, and the next Missions Consultation, likely 2012.
In this picture we were sitting listening to somebody, I can't quite remember. I turned around and snapped the shot in sepia just for the heck of it. And now it totally looks like a rock band pic. 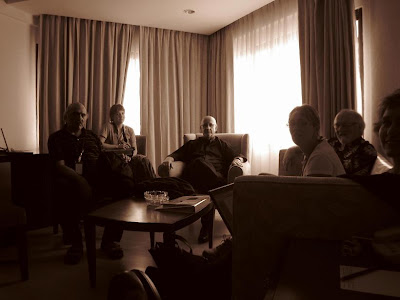 9. Sapphire mines: all day, every day, the same, same, same thing.
It makes you think when you go next to buy your gems. 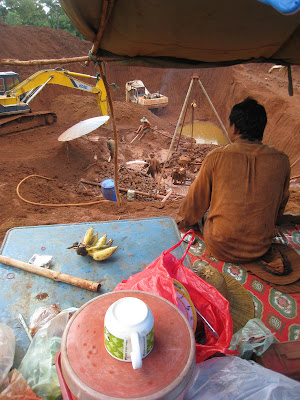 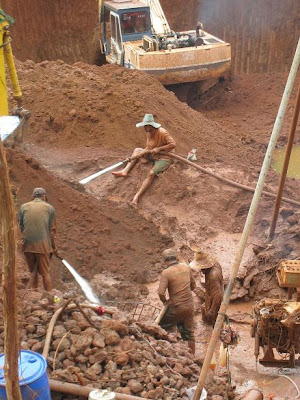 10. The Silk Factory.
After watching the process I have a slogan to recommend: "Worms will save the world." It's amazing how much beauty can be procured and re-styled from a grubby little worm. 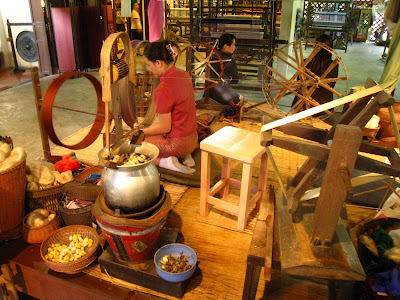 11. The Art of Maxican Food

We visited a Thai restaurant that boasted an international menu: Aussie, German, American, etc. And they had Maxican food. It cracked us up. We think they were appealing to all the lonely gringos desperate for food from "home." We think these lonely gringos are suckers. Look closely (or click on the pic) to see specific menu items. I think my favorite is Qusadialas. It's like Mayan mafia food. 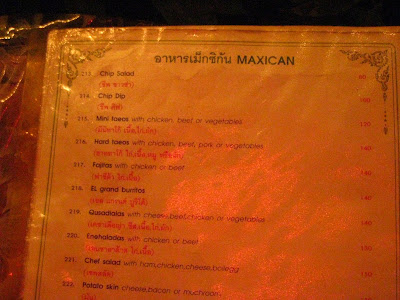 12. The Art of Lying Down with the Lion, er, 7 month tigers.
... who at one point thought my shoe was a toy and chomped down on my big toe. I said, "Yeooooooooowwwwwww!" And the trainer said, "Bad tiger, bad tiger," in Thai. 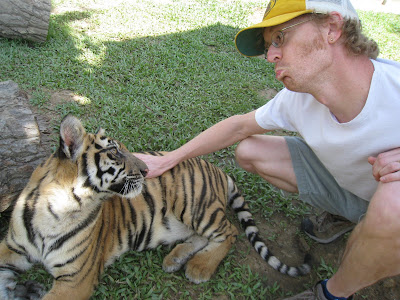 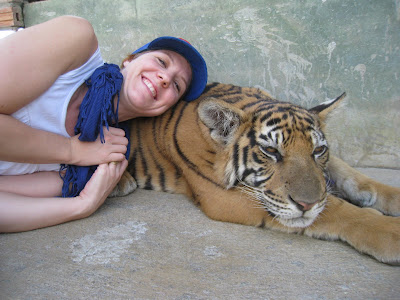 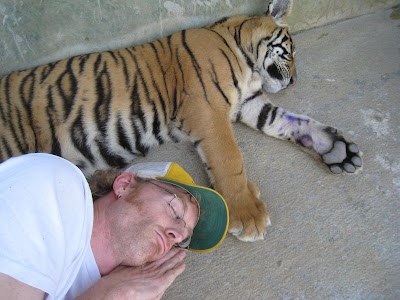 And now a bonus video. Here's me freaking out as I fed the thousand and thousand of carp swirling around me. I really don't like slimy fishy fish. But I did it. Phaedra did too. And we have a good story to tell the kids.

I was feeding them a foot-long green bean. And the video was taking vertically, but doesn't flip over, so you'll have to turn your head down. 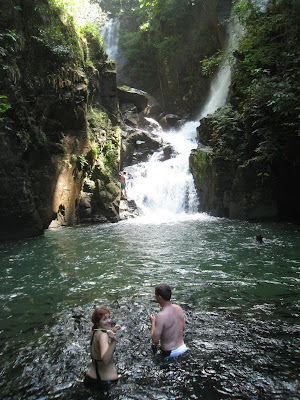 Heather said…
Thoughts:
4. Ever seen The King and I? Etcetera, etcetera, etcetera!
5. Now that's a recycling program!
12. I'm so jealous! Tigers are my favorite animal. In fact, for the resurrection, I've reserved mine--I'll ride his back while he runs through fields of flowers. Lifelong dream, you know.
7:46 PM

Ron said…
Would have loved to been there, so will look forward to your news about the Mission & Arts Track of the WEA consultation. Say hi to your Dad & Mom for us too sometime. The theology of the songs we sing is something I try to encourage people to think about too, glad you brought it up.
7:37 AM

The Aesthetic Elevator said…
Very much looking forward to the next installment dealing with the missions/art aspect of your trip!!! If you make to Urbana and I make it to Urbana next year, we'll have to make sure to shake hands. I've been the previous two, once as an attendee and then as an exhibitor, neither time though did I have time to adequately explore the arts track . . .
11:18 AM

tamarahillmurphy.com said…
love the pictorial...thank you!
love the poo-poo paper (who said you wouldn't get to see elephants?!)
love the micro-discussion on Hillsong and theology of worship music
love you guys

micah said…
Wow! D & P. What an amazing trip all around. Thank you for sharing your pics. I'm trying to imagine writing on elephant poo paper. smelly? smudgy? bumpy?
7:47 AM

I don't have your email address so I am posting here!

w. david o. taylor said…
Oy vey, it's been a rambling and fatiguing return to life in the US of A. But here we go.

Heather: yes, we love the movie and referenced it often during our time there. Very fun.

Ron: totally need to get you in the missions and arts conversation. Maybe next time in Europe. :)

TAE: I'm not sure I'll be able to make Urbana '09. I'll be back in the thick of school. We'll see. But I've been three times, the first in 1990, and thoroughly loved the experience.

Micah: the paper is crinkly like a lot of "non-tree based, artsy" paper, but it's fun to think of it as elephant poo paper every time we carry it from here to there in the house.