A Thing about Smoothies (or why smoothies aren't the Messiah) 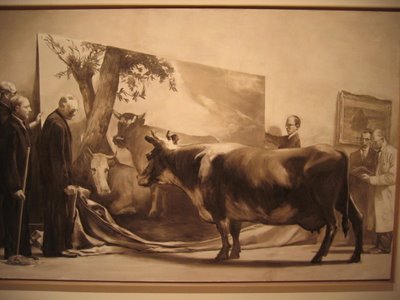 I love smoothies. I really do. I drink one every day. Ask my horn-tooter roommate Ed. Brush my teeth, quiet time, smoothie--the morning routine.

I can't exactly remember when I became religiously devoted about them, but it was probably my fifth year of graduate school when I lived with seven other people in a three-storey house in West Point Grey. In Vancouver. The city of naturists and The X-Files.

I think Amy Kettwig had the blender. Amy's from Minnesota and she gave me this black t-shirt that says, "My governor can beat up your governor." I used her blender with impunity. Mostly I drank Orange Juiliuses--the cheap, bastardized kind: orange juice, bananas and ice. Orange Juiluses don't have bananas. But bananas are good for you, and I was always either on the way out for a run or on the way back and bananas have potassium which keep you from cramping, and they're cheap, so I used bananas.

A real Orange Julius has orange juice, milk, sugar and vanilla. And lots of ice.

Now I have my own blender. It's a Cuisinart SmartPower. I am very proud of it, except for the fact that every time I run it I have to plug my ears it's so loud. I either need to buy one of those encasements like you see at Starbucks or I need to keep plugging my ears. I don't want rocknroll ears when I'm forty. I want to hear deer talking, like Native American hunters, which I try get Phaedra to think I am sometimes. Ed has rocknroll ears. But he plays third French horn between first and second horn in the Austin symphony, and twenty years of that makes you not able to hear your alarm go off unless your roommate (David) knocks on your door and tells you that your alarm woke him (David) up.

I make simple smoothies mostly. My standard is banana and vanilla soy. It's way good. Sometimes I add honey or peanut butter, or maybe acidophilus yogurt, but I tend to like mine streamlined. I am a Marines smoothie guy, not a Paris Hilton smoothie guy. I'm simple.

Paris Hilton smoothies come with lots of accessories. Like:

Hawaiian Cafe Au Lei or Green Tea Tango or The Gladiator (a real smoothie courtesy of The Smoothie King).

I love Paris Hilton smoothies but they're usually expensive, so I only have them as a treat. But a good smoothie is a good thing. In Biblical terms, it is good that smoothies exist. They're a refreshing drink that are good for you and efficiently made and consumed. They're highly useful. Modern people with lots of important things to do like them.

But let me take a detour for a moment.

I want to say something about one of my favorite restaurants in Austin, Mirabelle. It's a little restaurant in northwest Austin that serves "Contemporary American cuisine," which sounds like "Fractional Quantum Hall Effect." What the heck is "contemporary" plus "American" cuisine? It's a neologism. Basically it doesn't mean anything regular people would understand. In practice, it means what they want it to mean: "ecclectic American bistro," or in lay terms, fancy-pantsy, Europeanish food that people in country clubs on the East Coast consume after a long day at the golf course.

When I want to take a beleaguered artist out for a nice meal I take them to Mirabelle. I'll suggest the Spicy Duck and Sausage Gumbo to start off with. It's a dark black roux-based gumbo made with roasted duck, Elgin garlic sausage, Creole seasonings, herbs, bell peppers, onion, and a rich duck stock. Then I'll tell them that they should try either the Pecan Crusted Catfish or the Polenta Crusted Salmon with Vine-Tomato Butter, or if they're in the mood for white meat, the Stuffed Breast of Turkey with Ginger-Cranberry Chutney. Their salads are pretty scrumptious too. If the occasion merits it (if they're really beleaguered), I order wine.

I like the Sage Crusted Pork Tenderloin. It's a roasted sage crusted pork tenderloin in a wild mushroom, sherry, sharp white Cheddar and cream gravy, topped with a green apple puree and a fig slaw, and served with creamy mashed potatoes and sautéed green beans with toasted almonds. It's a drool fest.

When you're really hungry it's a circus in your mouth. The sweet gentleness of figs swirling coquettishly against the tang of green apple, trapeze plunges of sherry, lagoons of creamy gravy meandering through back of my mouth, the sharp crackle of almonds pulling at my ears--the juicy, tasty, luscious pork tenderloin firing my neurons with memories of romantic love and the lazy, happy days of summer in my teenage years when I'd lay on the soccer field and watch the clouds amble through a watery blue sky.

Food magazines should hire me.

If you're not careful, though, you start falling in love with the food on your plate. It's just that stinking good.

Which brings me to my basic point. There are two things you could do with my Sage Crusted Pork Tenderloin (SCPT): you could eat it one bite at a time or you could turn it into a smoothie. The first is the sane thing to do, the second is the quick and easy and absurd, cuckoo, and incredible.

You'd be surprised how susceptible we all are to absurd, cuckoo and incredible deeds.

You say you want to turn that dish into a smoothie? Most of us would howl dumbfoundedly, "No! Why! Stoooop!"

Empress Naughty As Can Be said…
It's good to be a smoothie purist, w.dot. There are way too many ingredients for people to make those at home. Have you ever tried silken tofu? It's the shelf-stable kind. You toss in 1/3 to 1/2 of the box (never more or else it has that flavor that's distinctly fermented bean curd. ew). It makes a really creamy, high-protien smoothie.

I like it with frozen fruit and a little juice. I'm probably going to make a smoothie for dinner now...
3:38 PM