The Art of Encouragement (2) 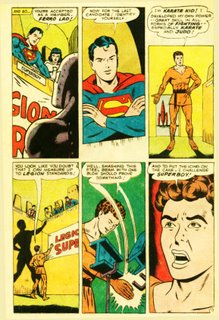 Let me illustrate. Kay Ramsey is 61 years old. She's a member of our congregation. When I sent a note to our arts community asking for any insights or stories, she wrote me the following:

“Your question number two brought up INSTANT childhood and young adult memories. What kind of encouragement did I receive as a child? How about NO WORDS? By the 6th grade everyone EXCEPT my parents thought I was a child protégée in piano - but never a word to me about my accomplishments from them. When, from the 7th grade until high school graduation, I wanted more than anything to be either an opera singer or singer in the theatre—and at that time I had the voice to do it—again, NO words or even acknowledgment of my accomplishments. Oh, yea, they provided for me to take the lessons, but never the hugs or praise that let me know they were proud of me. BOTTOM LINE - NO WORDS WERE FOR ME THE DEATH OF MY DREAM.”

I read this note and ask myself, What blessing, what glory has the world missed out on because of Kay’s loss? Is not her loss also our loss? Much like C.S. Lewis’ comment about Charles Williams’ death, that Lewis lost not only Williams but also something only Williams could bring out in Tolkien, have we not all lost something of ourselves because Kay lost a part of her identity in the absence of encouragement? I wonder. I wonder that about the rest of our broken, half-fulfilled lives.

But as we stand here today, God our Father encourages us from heaven, through His Son, in His Spirit, and He commands us to encourage one another other.

The question that’s put before us is: Will we be the kind of community that practices the generous art of encouragement? Will we as the Church settle for a kind of community that manages simply okay, looks no different than any other social group, plays the same old tired games of jealousy and super-coolness, or will we choose to be a Church that is irrepressibly generous, filled with artists who are more alive, more daring, more humble today than yesterday, where every member seeks gladly the best in the other, and whose consequence is a culture of abundant life?

The latter is my earnest prayer. And so my objectives this evening are twofold: (1) to provide us with a kind of landscape for the art of encouragement, and (2) to encourage us with a vision of the Church which through the particular work of its artists, is radically refreshing and powerfully transformative.

I will certainly not be saying here everything that could be said on the subject, but it will at least give us a good start.

I will proceed by way of a series of questions. Seven questions:

But first, a story.

This is the Key Image: a Melting Heart vs. a Strong Heart.

To en-courage: from the Lat. “cor” = heart – to animate the heart; to inspire a person with courage.

So then there are two basic elements to encouragement:

1. Encouragement has everything to do with the heart: it animates the deepest place of your person.

2. Encouragement addresses your identity. I have to know something about you for encouragement to work properly; and it deals both with who you are now and who you could become.

- EX: “Remember, Jeffrey, who you are: you’re a gifted artist” (actual).
- EX: “Jeffrey, you have what it takes to be a great filmmaker” (potential)

Question 1: What is encouragement not?

2. It’s not fanfare or flattery, which are fickle. EX: Jeffrey Travis’ conversation with Martin Sheen: “Don’t trust the movie culture, Jeffrey. One moment you exist because you’re on the cover of a magazine, the next month, when you’re off the cover, you don’t. People come up to me and gasp, ‘You’re still alive!?’ Of course I’m alive. Just because you don’t see me doesn’t mean I don’t exist.” Flattery, as the saying goes, can be as “useless as tits on a boar.”

Question 2: How many kinds of encouragement are there? I offer you two.

1. The rah-rah: the image of the cheerleader (The Choristers’ Clement Mathieu). The “energy bar” kind. The moral support. A lot of what I do day-to-day, like a soccer coach: “Rah Rah Rah, you can doooo it!”

2. The exhortation: the image of the sensei (Karate Kid’s Mister Miyagi). This is the kind of encouragement that comes from an authority figure who speaks the hard or discerning word into your life. Such a person, your mentor-teacher, guides, counsels, urges, comforts, strengthens, inspires you. The sensei exhorts to keep your art and your life in perspective. “It’s not all about you.” “You’re not going to die.” “This is really good work.”

One more story here to illustrate the power of a knowledgeable and kind-hearted rah-rah encouragement.

Elwood Fisher is a one-time, small-town engineer currently looking for a high school teaching job. He's in his late thirties, married and with a small child. Like many of us at Hope Chapel, he's a late-bloomer artist. He related to me the following story over an email.

“I won't get the age right. I was probably between 8 and 10 years old. A friend of my parents was an artist and the wife of a teacher/coach in the town next to ours. They were 'weird': he did Karate in a small Arizona town in the early 70s; they had oriental items in their home; one of our few non-church friends.

There was an art show of some kind, and this woman encouraged my siblings and me to enter a piece. Funny, I have no idea how she knew we had interest or ability. For my entry, I did a drawing. I think it was of a haunted house (a favorite theme of mine at that age): gravestones, cobwebs, dead trees, ghosts, dracula, frankenstein.

We were excited, waiting for the results of the judging. This woman reported them back to us personally. (I'm wondering now why we didn't go ourselves, guess it wasn't important to my parents—maybe it happened on a Sunday). And the results were also published in the local paper. We didn't win the 1st, 2nd, or 3rd, but somehow we, the Fischer children collectively, were awarded "special recognition" by the judges. I still don't know what that means, but as I write this I'm suddenly suspicious that this woman had something to do with that (she had connections, may have advocated for us). She also told my parents that I, especially, was talented and should have art lessons, and even went so far as to give me a set of oil paints—real paints, not the kiddy kind (I was still using crayons).

Doesn't sound like much. Somehow my folks lost track of this family soon after this. But that was the first time someone other than parents and teachers—who, after all, are supposed to say good things about you—had recognized an artistic gifting in me. I treasured the paints. Didn't use them, didn't have a canvas or a clue what to do with them, until about 5 years after college. Then, as part of my "breaking out" of being a small-town engineer, I did a painting which hangs above my desk as I type this. Wild clouds in a swirling grey sky, heavily textured bark on leafless trees, flame-colored grasses waving in a frozen wind: an image of life powerfully immanent in apparent deadness.

I'll always be grateful to this woman (I don't even know her name) for her intervention, for recognizing me as an artist, for recognizing that I needed that affirmed, even at my young age. Because of her, I had it in print: I was an artist worthy of special recognition by people who know about things like that.

The world of Art was so far from my parent's experience, I'm not sure that small flame would have survived without her intervention.”

My one thought here is: We can never really underestimate the power of the words we speak to each other. We have no idea what effect our words may have on a small kid or passing stranger or even on our closest friend. Elwood's story reminds me how precarious our lives are. One little word can crush our spirit.

One well-spoken word, in particular during our childhoods or at critical stages of our development even long into adulthood, can ignite our hearts with the longing and the resilience to become the person which God created us to be, which we ourselves, in the moment, see only darkly.

Chuck said…
This is good stuff, David. I think I will try to track your blog a bit. I write and speak a lot about encouragement in my work as a pastor; and struggle personally with the pull to become a jazz musician --that is, I occasionally quit my job and play music til the money runs out!

w. david o. taylor said…
Thank you for the kind word, Chuck. All God's grace to you as you negotiate your two callings.
9:08 AM